How NOT getting help for your depression is like burnt toast

What do I mean,  depression is like burnt toast?

Last year, I put some toast in the toaster and it blew my electrical fuse. A friend suggested I empty the crumb tray as that might have caused the problem. So I did that and used it again.

I had a working toaster again for a few months. Until it happened again. I had been emptying the crumb tray regularly as suggested by my helpful friend, but this time I just didn’t want to risk keep using it in case it did some real damage to my electrics.

So I found a way to get around it. I started using the grill on the oven instead. The problem with this is that grilled toast needs watching and with other things to do, I would often end up burning the toast which caused problems!

This workaround to the real problem of no toaster that I had created has other issues too. Such as:

I needed to take action and stop burning the toast

So yes, I know it sounds like I’m moaning a bit and I certainly didn’t lose any sleep about it, but this did go on for months and I could have done something about it much sooner!

I just needed to take action. I’m not sure why I didn’t do anything sooner.

Maybe life got in the way or there was just too much choice of toasters so I couldn’t decide which one to get. All I know is that it caused me irritation many times when it didn’t need to.

I found the right toaster for me 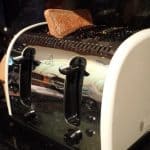 One day I was in Asdas and I saw a toaster which I knew would look good in my kitchen. I read about its features and liked what I saw. 4 slices could be cooked at once, you can cook from frozen wow and it even takes bagels due to it’s extra wide slots! So I bought that toaster and me and the toaster have lived happily together ever since.

I won’t say it’s changed my life but it does cook the toast perfectly and very quickly. And I just love a bit of brown seeded with peanut butter.

So how does this relate to depression?

As a hypnotherapist who specialises in depression and anxiety, the things that my clients who overcome depression always say are:

‘I wish I had done something about this sooner’

So my question to you is, how much burnt toast are you going to put up with?

I want you to know that you do have more control and possibilities than you think. Please do get in touch if you would like a free consultation.