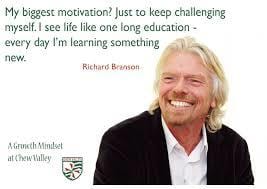 What gets you inspired?

Many people will answer this question with Richard Branson who has achieved a lot.

But when you think of the person that inspires you, why is it that they inspire you? It’s probably because they have a quality that you admire. It’s interesting to think about this as it gives you a good clue as to your own personal values.

So if yours is Richard Branson, why exactly is that? Is it because he built a business from nothing? Because he seems to respect his employees? Or is it his creativity? Or maybe his family values?

So many to choose from!

There are so many inspiring people to choose from but for today, I have chosen some of my favourites and will explain why.

I stole this line from one of my most inspiring people Michael Neill. He is an author and transformational coach. He works on an inside out premise, which focuses on the space inside of you where thoughts come and go. He inspires me because he looks at things differently and has suffered from mental health issues himself and aims help people with theirs.

This week, I saw on Facebook this video of Serena Williams reciting Maya Angelo’s poem, ‘Still I rise’. She inspires me because she has played tennis since she was 3, shows devotion to her sport and has overcome injuries. She is the world’s number 1 women’s singles tennis player.. She is involved in loads of charity work. She lives her dream and plays to her strengths.

Tony Robbins is an American motivational speaker and author. He has events worldwide that thousands attend. He had a tough childhood and is dedicated to helping people live positive lives. He is a philanthropist and gives a lot back to society.

Brene Brown is an American author and speaker and she is good at understanding the deeper aspects of people and explaining these in simple terms. 25 millions people have watched her Ted Talk on vulnerability.

When the going gets tough, some people just keep going and Claire Lomas is one of those people. She took 17 days to complete a marathon because she is paralysed below the waist. And it gets better because she didn’t qualify for an official medal so 18 other competitors gave her theirs.

Historic figures who inspire me:

I admire the courage of Nelson Mandela (1918 – 2013 ) – who campaigned for justice and freedom in his native South Africa. Spent 20 years in jail for his opposition to apartheid. After his release, he became the first President of democratic South Africa and helped heal the wounds of apartheid by his magnanimous attitude to his former political enemies.

Mother Teresa’s compassion is inspiring (1910 – 1997) – A modern day saint who sought to identify with and offer compassion to the unloved and destitute. Lived a life of voluntary poverty and service to the poor.

Some people share knowledge freely and it’s lucky that Leonardo da Vinci (1452 – 1519) – one of the greatest minds in human history, did this. In many areas he was a couple of centuries ahead of scientific discovery. He helped make great advances in anatomy, astronomy, physics, science and others. Amidst all this, he found time to paint the most iconic picture in history – The Mona Lisa.

Most people are inspirational in some way

I find something inspiring about most people in life. Their parenting, their achievements, their kindness, their generosity, their fighting spirit, their strength. The list goes on. There are everyday people doing amazing things which are inspirational. They are right there around us, every day. You are probably one yourself!

Honey Lansdowne is a successful Hypnotherapist in Worthing. She uses Hypnosis, NLP and 20 years coaching experience to help people overcome anxiety and depression in person and online.

Please log in again. The login page will open in a new tab. After logging in you can close it and return to this page.